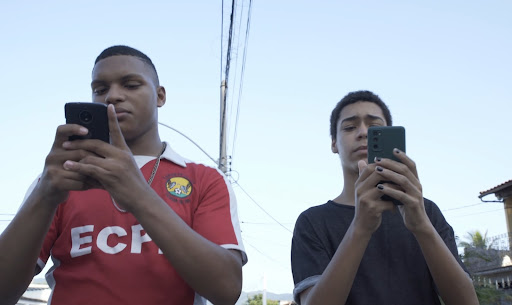 This article shares the experience of André Cardozo Sarli connecting his academic research and interests with a storytelling and filmmaking initiative led by adolescents to produce a short movie about connectivity. André is a PhD Candidate in Sociology and Children’s Rights at the University of Geneva, Switzerland. His current research is focused on how vulnerable Brazilian children appropriate datafying technologies and in doing so, how they perform their rights. He is interested in digital inequalities, AI and Sociolegal studies.

The outcome of this process was the short film “DesConectados”, selected as part of Mozilla Festival 2022 (MozFest) Arts & Media. The movie was filmed by Pedro Dannemann and produced by Gabriel, Emmanuel y Glauco. The video presents the viewpoints of three adolescents that live in a public shelter in Rio de Janeiro, Brazil, about digital technologies and the internet, and their divisive relationship with it. MozFest also featured a Community Discussion in which André presented the rationale, creative process and reflections upon its experience. In this article we get to learn about André’s academic research, in which ways connecting it with MozFest opened new opportunities, and some lessons learnt for those interested in taking similar roadmaps.

[Soledad] First, tell us about your PhD, what motivated your research and which are your main findings so far?

[André] My PhD is a long story so I will try to be short 👀. The idea of the degree is a result of a life-long struggle, and the topic arrived a bit late in the process. I was working on something related to how marginalization affects the performance of children’s rights. Then the pandemic came. My thesis was really dependent on physical presence in the field in Brazil, so I had to re-think, and had to do that for a long time. I took the opportunity to ask myself, what do I really like?, and how to connect that with the findings, background, without deviating too much from my thesis project.

I am not only a PhD but also a Research Assistant in a project, and I had to visit many shelters in Brazil to do interviews - that is, before the pandemic. One of the things that caught my attention, or rather, caught the attention of the teenagers I was interviewing was my Mobile Phone. It was not a high-end model, but rather a simple one. You see, they were telling stories about discrimination, abuse, abandonment, violence and violation of rights, but then suddenly the mobile phone became the center of attention and their eyes were shining. Then they talked about their favorite apps, asked to see what I had, if I played Free Fire, etc. After I left, a few of them even managed to find my social media, requesting to add me and kept checking on me. I found it dazzling because it helped me to check my own prejudices about what is life for youth in a shelter.

My family and I had our big share of struggles, living in a peripheral area of Brazil when I was a teenager, among other things. But back then, around 2000, my mother was sure that the internet would be the future, and she was right, so she wanted to make sure we had access to it. My brothers and I were very enthusiastic users. So those visits to shelters touched me on a personal level.

My PhD now combines all those elements - how does the marginalization/exclusion influences the ways in which teenagers living in shelters use the internet, and what is the outcome for their rights. This is something that I am really passionate about and at the same time quite challenging. How to analyze, for instance, that a boy was living in the streets just a few years ago but he is a huge fan of Naruto? His avatar and profile name are related to that japanese animation. This is something that can look contrasting because Brazilian people imagine those children only as victims or criminals, not Otakus (Japanese anime fans). I felt an interesting connection because I am also a fan of this kind of media, and I know how this culture is majoritarily white. To illustrate, a recent news article from Brazil spoke about how a black man living in a Favela doesn’t feel welcome in Japanese animation events.

Another finding was that many of the children living in the shelters are influenced by the challenging environment they were brought in and how this is reflected in their online activity. For instance, I found a correlation with the influence of drug cartels and general crime. This was reflected in them posting things, such as in support, or being part of a subculture related to these problems. What I found out is that this certainly cannot be ignored. We nowadays talk about digital surveillance (Zuboff, 2018), but this made evident to me other kinds of surveillance from different actors than big tech and governments, such as, in this case, drug cartels or militias.

[Soledad] We got to know each other at Parables of AI in/from the Global South from Data & Society. In which ways did that experience influence your motivation to develop DesConectados for MozFest?

[André] Parables of AI in/from the Global South from D & S opened my mind to the different arrangements between research, practice and communication, one of them being storytelling. But unfortunately, I was shy and registered only as an active listener. Then I got to hear many extremely interesting stories about tech and AI as seen from a global south perspective and I found so many connections with the stories of the teenagers I was working with. I said to myself: I gotta do it next time!

I felt incredibly inspired and motivated to work with storytelling on many fronts. Both with science communication, and in centering part of my research on the stories as told by the teenagers. A third one was a bit more ambitious, which is to encourage and facilitate a youth-led story to become alive through a cultural medium. But this one wouldn’t be an academic activity.

Then the opportunity of MozFest was presented. There were so many people talking about it, how it is a festival for enthusiasts of technology and how it incentivises different formats for discussion, like art. I felt it was the perfect occasion to try to bring to light that third idea.

When I pitched the idea of facilitating a short movie produced by teenagers in a shelter in Brazil, I wasn’t really sure it would come to fruition. There were so many elements that didn’t depend on me and needed to be connected with different people in Brazil. So I originally decided to choose a format of a regular session where, in case the short movie wasn’t recorded in time, I would present just the script and discuss. Fortunately, the team of wranglers believed in the idea and suggested showing it as an Arts & Media. I am glad I did it because the short movie was available to be watched for a long time!

[Soledad] How do you perceive that the MozFest/DesConectados experience will influence your research?

[André] Participating at Mozfest and interacting with the filmmakers and teenagers pushed me to think of other formats that I could use to make my research interesting or to use it as one of the cores of my research. It made me think, for instance, about turning part of my PhD in a movie, a comic strip or asking the teenagers to produce something material. Overall it made me think how Academia can be more interesting. If not for my PhD, I certainly will integrate multimedia and cultural artifacts for a Postdoc or for my future job.

I think in all the fields of science, but especially for childhood and youth studies, it is really important to report back to the young that helped and were part of the research. I am really interested in science communication, and I want to reach them and overall the lower socio-economic populations that don’t see much incentive in working with research.

[Soledad] What were the most interesting takes from the Desconectados experience and how did you approach it at the Mozfest?

[André] DesConectados is the result of many interesting things. The first is that children and teenagers living in shelters are generally invisible and this translates in unstable funding, lack of proper equipment and lack of activities. So for a shelter to have filming equipment and an initiative for filmmaking in the middle of downward trend to cut social expenses and generally a discriminatory culture against those children is an impressive feat. The second was about the scripting process. I pitched an idea to the teenagers that was more akin to what I am doing for my research, but I didn’t want to influence and direct anything. I was expecting them to do something related to their experiences online and to my surprise, they did approach it in an unexpected way: disconnecting. They produced a movie about how we are overconnected and forgetting about the “real world”. I am very glad with the result because I didn’t think about this “refusal” dimension at all when I was focusing on my research.

[Soledad] What are the main recommendations to academics interested in working with children and using alternative methods of research and praxis?

[André] First of foremost, it might sound cliché now, but think outside the box. At academia and praxis we are accustomed to work and think in a certain way, so one should allow themselves to venture to different experiences such as parables of AI and Mozfest.

The second and even more important is to, when working with children, to respect and listen to their voices. Otherwise we are just using them or determining what they think. Let them have free choices. When I did this, I was very happy that they twisted my original idea in a different message they wanted to pass. In the end, we need to facilitate, not direct.

Finally, we need to take in consideration the children’s best interest in the whole process. They need to be consulted at all times and we need to be aware of the intricacies and experiences they were subjected to. Especially for marginalized children, which is the case of my session, we often stumble upon undesirable memories and other things they don’t want to talk about. So more than following the basic standards of ethics and having the written consent, it is important to also consult with people that are familiar with them. I was lucky that the filmmaker is familiar with them and I also knew and consulted with a staff member of the shelter.

[Soledad] Thank you so much André for sharing your experience!