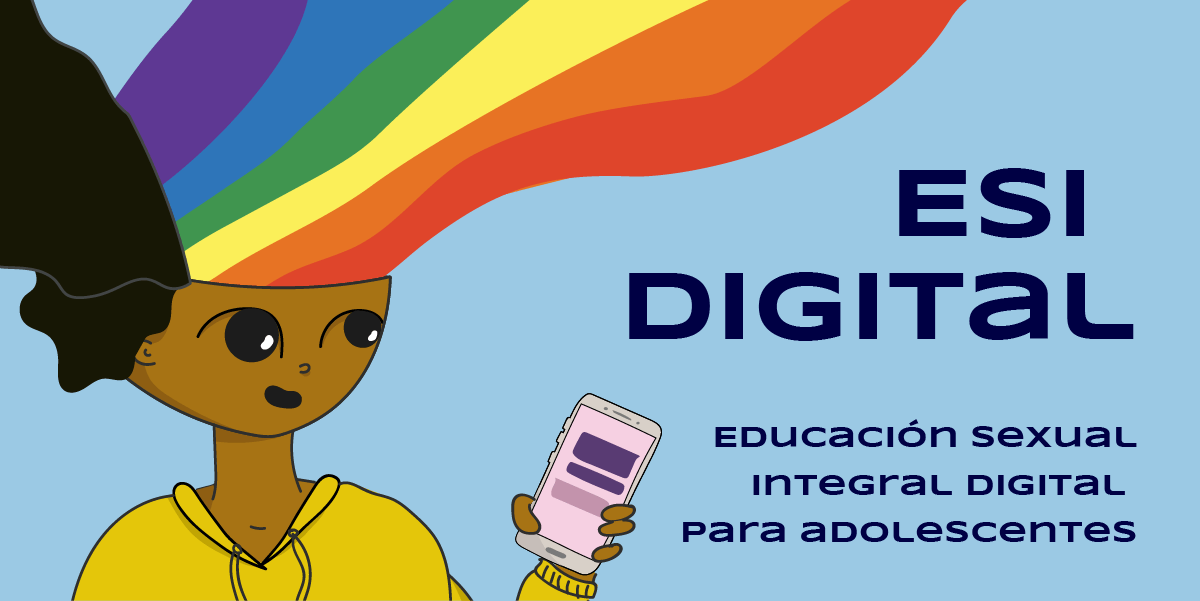 ESI Digital from JAAKLAC aims to promote Comprehensive Sexuality Education (CSE, ESI for its Spanish acronym) in relation to digital technologies to minimize online sexual risks among adolescents. The project consisted of the co-creation of an educational guide and a campaign to disseminate it on social networks with adolescents and adults in Uruguay. The guide covers topics such as sexual and reproductive rights, digital education, internet risks in adolescence and digital safety strategies. Civil society organizations, schools, digital safety activists and creative agencies were part of the team. The project was supported by the Rapid Response Fund of Derechos Digitales.

Gender-Based Violence in Adolescence and other online risks

The Internet has improved the lives of many people, yet social inequalities are both cause and effect of the digital divide. Worldwide men are 21% more likely to use the internet than women, a gap that increases to 52% in low-income countries (Web Foundation, 2020a). This situation is due to the fact that women have greater difficulties in covering costs, lower levels of digital education and greater probability of being victims of digital violence. In relation to this last point, it was registered that 52% of young women and girls in the world have been victims of online abuse and 87% perceive that the problem is getting worse (Web Foundation, 2020b). It is important to note that these issues particularly affect people that represent afro-descendants, LGBTQI+ and disabilities.

According to data from the National Institute of Statistics (INE) of Uruguay, 100% of people between 14 and 19 years of age use the internet. This context has expanded opportunities and brought new challenges. The local study by Global Kids Online (GKO) (UNICEF, 2018) recorded that the biggest concerns among children and adolescents aged 9 to 17 when using the internet were being contacted by strangers, harassment and bullying, an uneasiness shared by their parents. These are currently materialized through data from the Ministry of Interior, registering around 3,500 annual reports of child sexual abuse on the internet (Scherz, 2021). The situation becomes more complex when observing that according to GKO, only half of those who experienced negative episodes asked for help or discussed the event with someone.

“Girls don’t report digital violence, why? Because of the fear that they will not believe me, they will tell me that I am an exaggerator, that I am lying. And this problem that we are observing is widespread in our region and is shouting at us that we have to remember that adolescents are subjects of rights and that they have agency”. Angie Contreras (Cultivando Género) in the ESI Digital online panel discussion.

To address this problem, it is important to promote an education aimed at ensuring that adolescents use digital technologies critically, recognizing that these are part of their development and sexual exploration. However, digital education has not sufficiently covered strategies for adolescents to learn about the different digital risks associated with them, how to prevent and minimize their damage. While not a comprehensive solution, CSE plays a role that can be decisive in addressing cases of digital sexual abuse. According to the United Nations, CSE encompasses more than biological and reproductive aspects, including human rights such as self-determination, gender equality and acceptance of diversity, and should be promoted from childhood and throughout adulthood (UNFPA, 2015).

Digital technologies are formal and informal channels for young people to approach CSE, through websites, apps and chat rooms. Internet influencers are also a source of learning, advice and reference, sharing information, including commercial one, about the body, sex and relationships. Digital CSE facilitates access among people who are commonly excluded, such as those living in rural locations, with disabilities or LGBTQI+. However, at the same time it can exclude with stigmatizing content, for example, by imposing heterosexuality as a norm. Also these groups often have problems accessing technologies and risks exposing themselves to comments and attacks (Jolly, 2020).

In Uruguay, digital education has focused mainly on teaching and learning using digital technologies, representing a great deficit in issues such as the protection of children and adolescents (Magnone, 2021). Moreover, the relevance of a project such as ESI Digital lies in the fact that Uruguay is experiencing a setback in its progress over the last 10 years in this education (Gerhard, 2020). The current disarticulation of the Sex Education Program (Programa de Educación Sexual, PES) promotes that the learning of this subject in Uruguay depends on the will and possibilities of families and educators, thus enabling risks particularly among the most vulnerable sectors of the population.

“These topics are taboo for adults, but among young people it is common to talk about them, more at high school than at school, and at school than at home”. Adolescents from IPRU, Casa Jóven and Casa Upa in ESI Digital workshops. 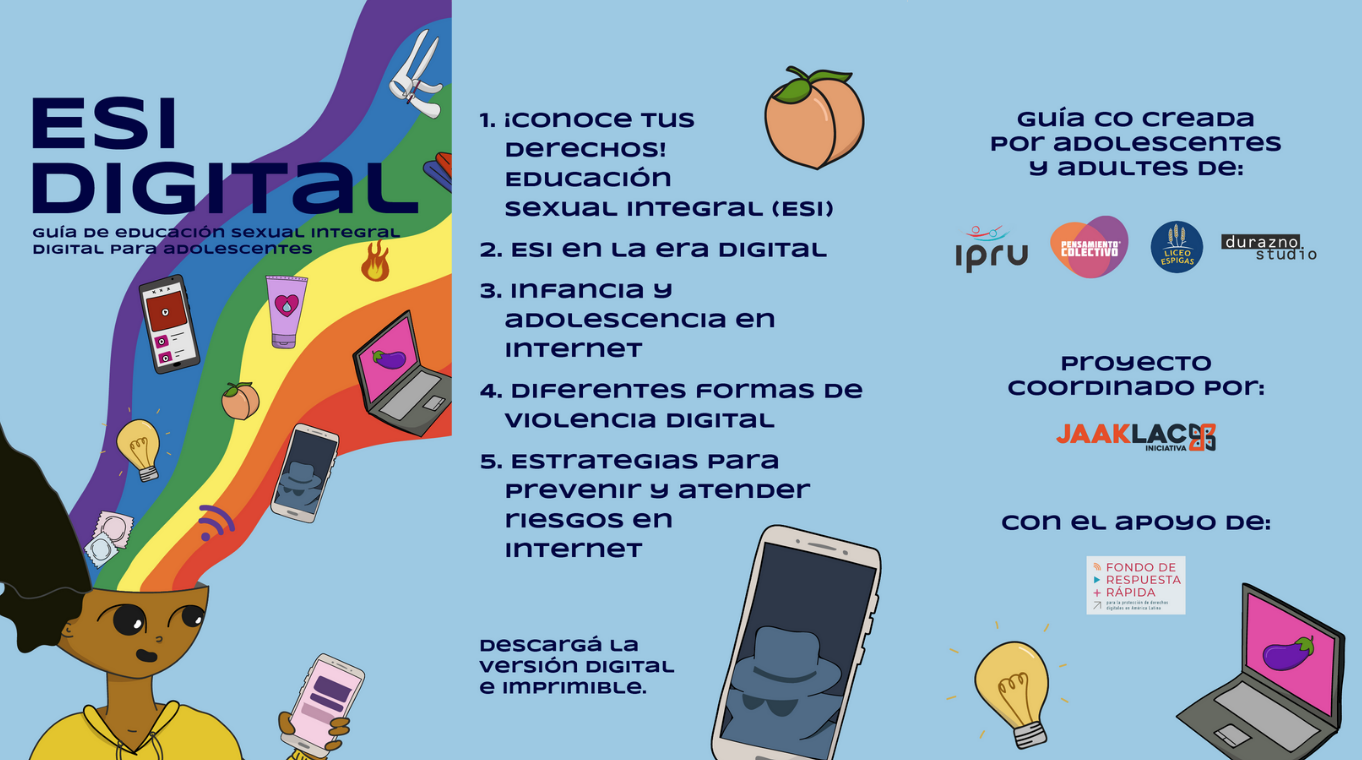 To help minimize the impacts of this regression on education and human rights in Uruguay, this project developed “ESI Digital: a guide on Digital Comprehensive Sexuality Education for Adolescents” and disseminated it through a social media campaign. For this, the collaborations were coordinated between adults and adolescents from IPRU, Pensamiento Colectivo, Liceo Espigas, Durazno Studio, Conexión Educativa and WILD FI. Between August and October 2021, a series of 7 mixed face-to-face and virtual workshops were held, in which around 30 people participated. The hybrid dynamics were designed to develop digital skills and innovate practices for learning and teaching with and about digital technologies.

In the workshops we advanced on different drafts of the guide, dynamically incorporating the guidelines to facilitate the workshops, the conversations and the information gathered for the literature and research review. We launched the guide as part of a campaign on Instagram with the support of influencers who shared information about the guide, their experiences, recommendations and generated conversation with their audience about these issues. Finally, a virtual panel was held where representatives of the ESI Digital team and Cultivando Género, teenagers and adults, shared their opinions about the project. ESI Digital is available in digital and printable versions so that it is accessible for different contexts and needs. It represents a great contribution at the local level as it is the first educational resource on this topic. Moreover, it stands out for its fresh contribution based on gender diversity, human rights and adolescent participation.